For the past few years, I've been working on a GM-less, rules-lite tabletop RPG about actors fighting to be the star of a movie they're making up as they go. Playtesters have been having fun with it, and have asked for a version they can bring home to play with their friends. So I've managed to put together a demo version and am releasing it!

BLOCKBUSTER! can be played by 3-6 people, ages 8 and up. Playing a single act film takes about 2 hours while a three act film can take up to four.

I hope to release a full commercial version in the future that fleshes out the rules further, provides more examples, and possibly a deck of studio notes so players don't have to take time coming up with a deck of their own (though I wouldn't let go of player-made studio notes. Those are just too good).

Inspiration for the game came from listening to movie podcasts, particularly How Did This Get Made?, which examines bad, and otherwise weird movies, and how the business of filmmaking creates the art of film.

The game is easy to pick up, relying on players' imaginations and rolling six-sided dice to determine if their actions succeed or fail.

If you get a chance to play with your friends, let me know what you think of it. I'd love to know what kinds of stories you come up with. And if you are able to get video of your own stories, Share them with me here, or on twitter @BlockbusterRpg.

Popular posts from this blog 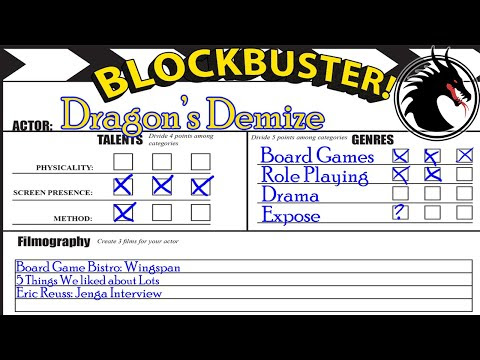 The folks at Dragons Demize  had me over to play a one-act BLOCKBUSTER! film. It has everything: assassination attempts, love triangles, and robot scorpions! Check it out!
Read more